Or….. What is a parent to do regarding the most popular Christmas lie? 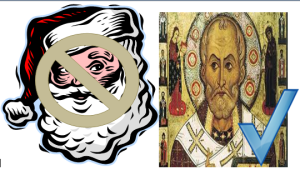 Being school teachers and nerds in general, my husband and I put a high priority on knowledge. If my husband discovers that he does not know much about something he will dedicate countless hours to ____________(insert blank with any given topic) and learning EVERYTHING there is to know about said topic. A few years ago  the topic of choice was Santa Clause –  excuse me, Saint Nicholas. He even did a presentation at church…complete with power point.

Now I am sure by now you all know that the REAL Santa Claus does not have magical reindeer and live at the North Pole. What you may not know is that the man we now call St. Nicholas was born to wealthy parents in the third century. When his parents died, instead of spending his inheritance on wine and women, he, following the teachings of Jesus, used his entire inheritance to help the poor.

And he was serious about it. One of my favorite stories is about how he would 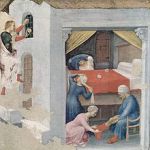 The gold was for a dowry so this man’s daughters could marry….

throw bags of gold through people’s windows and run off…and….AND he punched  the archheretic Arius at the Council of Nicaea!!…hilarious stuff. Not only did he go to extremes to help people, he was serious about TRUTH.

The stuff of legend.

Even though he was made a bishop and known for his wealth, he still suffered persecution and imprisonment under Diocletian with  many other Christians. When he died he became an icon of generosity and piety.The anniversary of his death (on December 6th) began to be celebrated as his feast day.

Most importantly,(the point of the history lesson) Nicholas did what he did because he LOVED Jesus. He was a FRIEND to Jesus.

And being the forward thinking parents we are, and desperate to raise our children Biblically, ….. this is what we told our oldest.

So, if you ask Corbin about Santa he will tell you that St. Nicholas lives in heaven with Jesus and we wait at Christmas for the spirit of Santa to come with presents. ….

That was until two weeks ago. Two weeks ago my mother-in-law got wind of this. The conversation started with Corbin saying,

“Mimi did you know…..” (my son is very proud of his knowledge)

And Corbin proceeded to tell Mimi his profound Christmas knowledge. It was met with, “Corbin a ghost does not bring your presents on Christmas Eve!”

While a noble endeavor, Jack’s attempt at Christmas failed….

Now, by spirit we meant tradition, essence, um…. but I guess as much as my kids love the Nightmare Before Christmas, that could work as well….

The point is, Mimi was appalled. This is a woman that lives 10 months of the year preparing for the two at the end when it is socially acceptable to create 40 different types of cookies, put up a ginormous tree, and deck the halls with 15 poinsettias and 30+ years worth of collected Christmas decorations.

Not wanting to be that daughter-in-law, I didn’t say anything as I listened to her whip up a detailed explanation of how there most definitely is a Santa Clause at the North Pole and his “office” is passed down periodically. After her lengthy, perfectly logical explanation and 2 hours of my life gone to The Santa Clause, Corbin is now completely convinced of the existence of two Santas and …..if we are lucky, Nathan will push the current one off the roof, and Corbin’s daddy will get to be the next official Santa of the North Pole.

It was this North Pole Santa that sent Buddy the Elf with a personalized letter to Corbin and Gabriella reminding them to be a good boy and girl if they do not want coal for gifts. It will be  this North Pole Santa who comes through our back door (no chimney, natch) and delivers presents on Christmas Eve.

And I am torn. I do not want to corrupt my child’s innocence. At his age I had figured out the hard truth when I determined that all the Christmas tags were written in my mother’s handwriting and…..I told my younger sister….. who in turn announced it to her entire class at school…..

I have known families that completely boycotted the Americanized Santa (created with the publication of “A Night Before Christmas”) and do not even allow their children to get gifts. I love giving gifts, I love seeing my children light up, but can’t we find a creative solution?

What if we all boycotted Santa……. only to embrace St. Nicholas? What if we vocalized that Christmas is when we celebrate the COMING OF CHRIST as a baby? We give gifts to honor and represent the irreplaceable gift GOD gave us with his son, and in turn the sacrificial gift of ETERNAL life Jesus gave us with his life.  And what if….. what if…. we explained to our children that St. Nicholas got this? He gave all he had….. sacrificially….. to others because he, himself had received that amazing gift of GRACE. And what if that was the solution…. to explain that we are carrying on the tradition St. Nicholas started?

My heart gets so full at Christmastime that I will spontaneously burst into tears at the sound of Christmas carols. My parents worked soooo hard to make Christmas special. Amidst all our dysfunction I remember Christmas with sacred traditions. The realization the enormity of God’s sacrifice (and Mary’s) has become more profound since having my own two children. Having nursed them, swaddled them and learned helplessness in their vulnerability I have wrapped up all my hopes and dreams in their well-being… it now means more. I hope that I can pass on the magnitude of emotion: joy, love and gratitude, that overwhelms me with this season.

So, maybe we aren’t 100% theologically correct for this year we have two Santas. There is the one with a reindeer with a glowing nose and a creepy elf that reports lists of my children’s misdeeds nightly,

St. Nicholas…. who will help my children pick out ducks, chickens and a water filtration system for children their age in Africa. And when we gather to worship the Christ child St. Nicholas will be worshiping and singing with all the other saints already before the throne.

For to us a child is born,
to us a son is given,
and the government will be on his shoulders.
And he will be called
Wonderful Counselor, Mighty God,
Everlasting Father, Prince of Peace. – Isaiah 9:6 NIV